While dying Leonardo is reported to have mused “That he never tired of being useful”. After his death reviewers found, written in his own hand throughout his notebooks, the lament, “Have I really accomplished anything?”.

This from the man who brought us great art including the Mona Lisa and The Last Supper. A man whose Codex of Flight of Birds held theories of flight confirmed by science and technology some 400 years later. 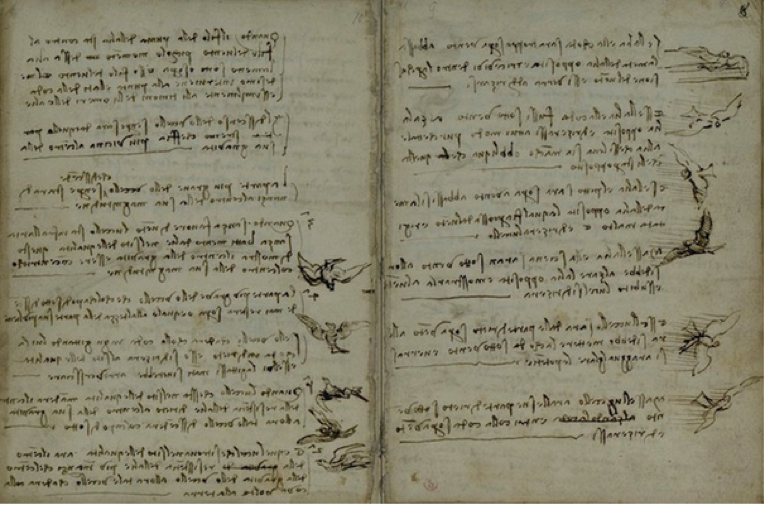 A man whose anatomical drawings were proven accurate hundreds of years later by x-ray. A man who invented the parachute, scissors, automated loom, canal lock, tank, the loom, helicopter and hydraulic jacks. And this is just a small sample of Leonardo’s accomplishments in art, science and engineering.

So, how are we to interpret these mournful musings? A tortured, discontented soul?  A humble brag?  It’s hard to know but I think the answer can be gleaned from his life and his work.

The man who left us so much began life with little expectation. Leonardo was born April 15 1452, as the illegitimate son of Ser Piero da Vinci, a wealthy accountant for the City of Florence, and a peasant woman from Anchiano, a village near the town of Vinci. It was his father that first recognized Leonardo’s talent in a shield he painted for a member of the household staff.

Leonardo was soon apprenticed to an arts studio in Florence in his early teen years. His master, Andrea del Verrocchio, no slouch as an artist with works still adorning the cities of Venice and Florence, asked Leonardo to contribute to his Baptism of Christ. The angel in the lower left and some of the background has been attributed to Leonardo. According to Giorgio Vasari, the biographer of many Renaissance artists, after seeing Leonardo’s work on Baptism Verrocchio vowed “never to touch colours again” and soon after returned to sculpting. 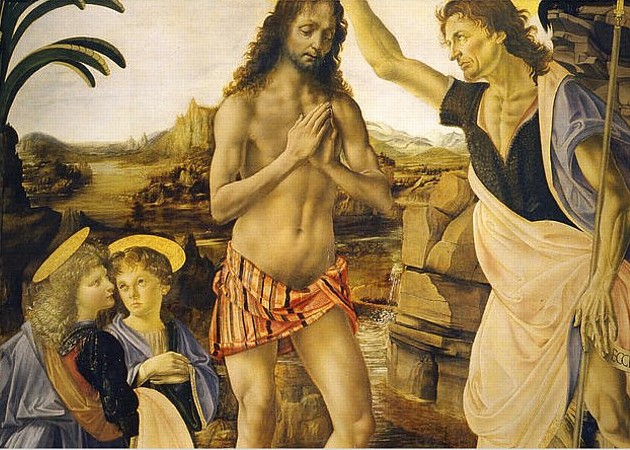 Leonardo’s talents attracted the attention and patronage of the wealthy and powerful throughout Italy and France. Lorenzo de Medici, known as Il Magnifico for the generous patronage that fueled the cultural ascent of Florence, introduced a young Leonardo to the philosophers, mathematicians and artists (including Michelangelo) that worked in his Court.

Seizing the opportunities afforded him, Leonardo embarked on studies of anatomy, astronomy, botany, geology, geography. These areas of study combined with what appears to be gifts of musical talent, storytelling, singing and a natural grace, beauty and physical strength earned Leonardo the title of Renaissance Man (centuries later) or Uomo Universale.

The most important part of this grandiose title is simply the word man. Leonardo was not super-human, his skill was self-developed.  Leonardo was gifted with multiple talents but his genius lay in his activation of his talents, his senses and the very human qualities of reason, emotion, curiosity and courage.

Leonardo had a singular purpose that, in his words was, “to unify all knowledge” in his quest for Truth and beauty.  He believed in, and was fascinated by, the unlimited nature of human potential and our world.

“All our knowledge has its foundation in our senses.”

Leonardo “sensed” his way through life.  Leonardo relied heavily on observation first, believing the eye was our first and primary sense. In his words it was important to “see things as they are”. He believed sight was our greatest sense in that it connected to the soul and gave meaning to our “organ of perception” or “sensus communis”, the place where the five senses join, behind the eye and was considered by Leonardo to be the seat of the soul. And perhaps, the source of curiosity.

Sigmund Freud wrote “He transmuted his passion into inquisitiveness”. He has been called by Kenneth Clark, author of Leonardo Da Vinci,

“the most curious man in the world”

Leonardo questioned everything, not because he questioned authority (although he did doubt its infallibility) but because of his innate curiosity about the world and the mysteries that it holds. To know is to understand truth, Leonardo believed, and to get at the truth one must see things as they are.

Observation and curiosity gave Leonardo the confidence to decipher the connections between humanity and our world. He “sensed” the inter-relationships between man, animal and plant and how all things seemed connected. Leonardo observed nature and its natural systems of communications between all living things. The leaf and root structures of plants struck him as similar to our own veins and organs. He found the relationship between rivers and human veins, water and blood and predicted that hardening of the arteries due to diet and inactivity was like silt in a slow-moving river.

Leonardo was one of the original thinkers, a man who inspired his own students to be “inventore” or an original thinker. Leonardo encouraged dreaming and imagination as a source of ideas. He wrote,

“(imagination) a new and speculative idea….. nonetheless of great value in quickening the spirit of invention”

He was a pioneer of integrated thinking. He popularized brainstorming in the 1500’s, long before it became an ideation technique. His scientific principles laid the groundwork for modern science.

However, in his dying days Da Vinci asked forgiveness “for leaving so much undone”. Leonardo certainly had unfinished business; The Last Supper (imagine what the world’s greatest painting might have been?) and The Battle of Anghiari, to name two.

Leonardo also had many failures; his concept of locks to divert water around Florence failed miserably; his experiment with the paint for The Last Supper did not work; he never wrote the book that unified all knowledge and he never organized the multitude of notebooks he created, most now lost to time. 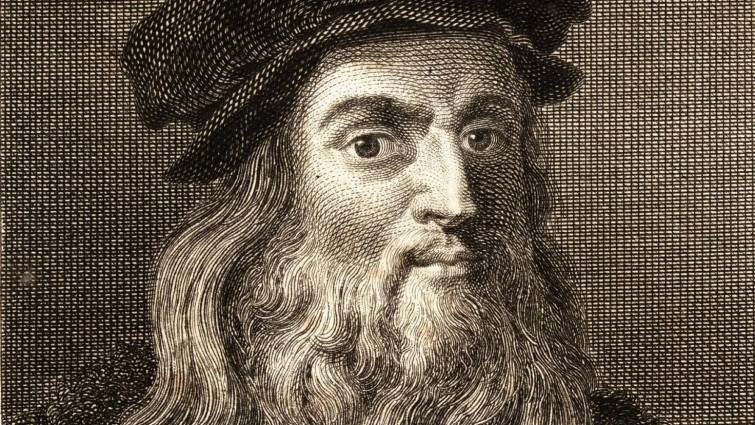 But, perhaps in his unfinished work and even in his failures we find his greatest Truth; that striving to be better is, in the end, a human failing because we are never done. But, anything that somehow advances, enhances or improves us is a worthy contribution to the human journey.

Leonardo may not have believed in himself, all the time but, he passionately believed in humanity and our very human qualities of emotion, reason, curiosity and courage. He understood our frailties. In all this Leonardo saw hope and possibility for progress and advancement.

I think this is what Leonardo was lamenting. He was not lamenting for the work left undone but for the possibilities of what would come after him. I think he was lamenting the fact that he would no longer be part of humanity’s greatest gift; our drive to become better, to advance and to leave this world better than we found it.

I hope Leonardo has found peace in the fact that he, like all of us, are part of this grand human condition and that his genius of observation and curiosity can be found in all of us.

Consider David for a speaking engagement.

Be sure to discover The Unlimited Planning Process for insights and direction needed to discover and activate your unique operating system.

Get the Unlimited Blog right to your inbox Sign up here.

Get the Unlimited Blog right to your inbox. Sign up here.

Be sure to discover
The Unlimited Planning Process for insights and direction needed to discover and activate your unique operating system.

For all the latest news on
Strategic Initiatives Group
Sign up for our Newsletter.

Like what you’ve read?
Consider David for a
Speaking Engagement.

Any cookies that may not be particularly necessary for the website to function and is used specifically to collect user personal data via analytics, ads, other embedded contents are termed as non-necessary cookies. It is mandatory to procure user consent prior to running these cookies on your website.